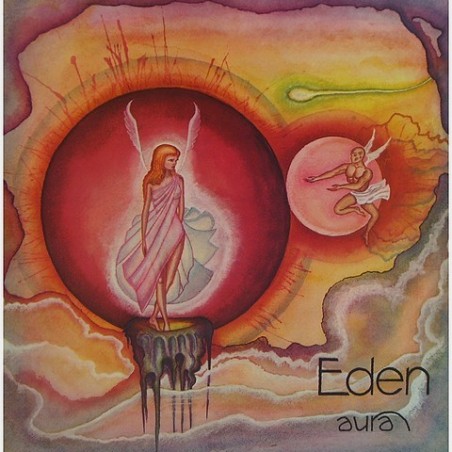 French duo: Hubert Vrayance, who composed the music (Hammond organ, bass pedals, synthesizers, vocals) and Allan Lys (drums, congas, percussions). Eden released one album AURA in 1979. The music is more simplistic, straightforward in their approach (compared to others in this genre). Melodic, they start their tracks with a main theme upon which they add more layers of sound and more ideas. Each track is depicting a different theme, idea or scene. For instance, the first track “La Nuit Des Sorciers” (The Night of the Wizards) is about “silhouettes dancing to the rhythm of winds in a dense wood under a strange moon”. This album should appeal to people who like organ work and a melodic album which can serve as soundtrack for a late afternoon or early Sunday listening. Ambient cosmic electronics gem! Top Copy!
OXY 045